New sales continued at a sustainable level even during the Covid-19 circuit-breaker period. 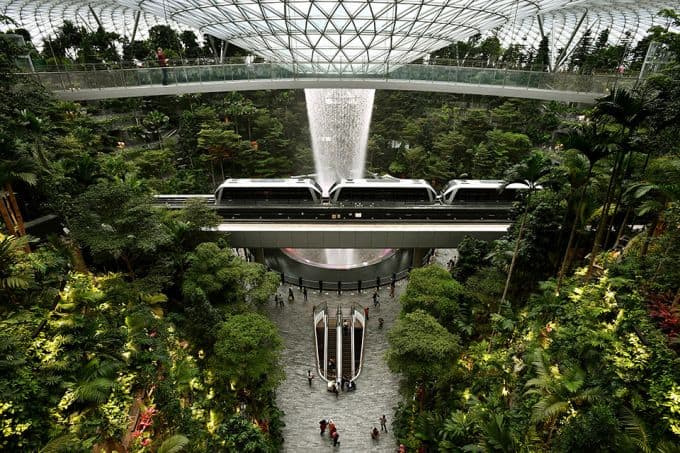 For many homebuyers, the East Region conjures up idyllic images of recreation and an array of shopping malls found in the town centres of Bedok, Pasir Ris and Tampines, together with the unique Jewel at Changi Airport (above).

THERE is a saying among some of the older baby-boomers who grew up in the east of Singapore, that those who grew up there will almost always want to remain in the east when looking to move into a new home, settling down with a family, or looking to retire. Aside from the nostalgia held in the memories of these residents, many other factors make the east an attractive location.

The East Region comprises the six planning areas of Bedok, Changi, Changi Bay, Pasir Ris, Paya Lebar and Tampines, and actually does not include the secondary prime residential planning area of Marine Parade, which geographically falls in the Central Region based on the Urban Redevelopment Authority's (URA) planning boundaries.

The East Region offers homeowners and residents much in the way of an overall lifestyle and living package, characterised both by nature (for example, a long, extended stretch of seafront) and man-made amenities (for example, Changi Airport).

Residents also typically have access to open-space recreational areas and park connectors that have been planned alongside employment centres such as Tampines Regional Centre, Changi Business Park and the industrial estates of Kaki Bukit and Loyang, for instance.

Covering an estimated area of about 115 square kilometres (sq km), the East Region is the second least populated region in Singapore, with only the North Region having a smaller population due to its inclusion of the Central Water Catchment areas.

However, it was the increase in private residential properties (excluding EC units) that was more pronounced at some 11.5 per cent from around 61,000 units to 68,000 units during the same period, with the majority comprising non-landed homes in the residential estates of the Bedok, Pasir Ris and Tampines Planning Areas.

Within the East Region, not many large-scale developments were launched for sale in 2015 and most of 2016. The new sale volume of non-landed private residential properties (excluding ECs) in the three planning areas of Bedok, Pasir Ris and Tampines then trended at typically under 200 units per quarter, mostly a result of sales momentum from existing launches.

However, from the fourth quarter of 2016, new launches such as The Alps Residences, Grandeur Park Residences and Seaside Residences - which formed a total of almost 2,200 units - pushed primary sales between Q4 2016 and Q2 2017 to above 500 units each quarter.

From 2019 to Q1 2020, demand was steady, ranging between 250 and 350 units per quarter for new homes (Exhibit 1), dominated by the Tampines Planning Area. This steady, resilient new home demand in the east even continued through Q2 2020. Despite restrictions on human and economic activity imposed during the "circuit breaker" partial lockdown, there were still some 192 new sale caveats lodged during that period (based on available data as at June 23, 2020). 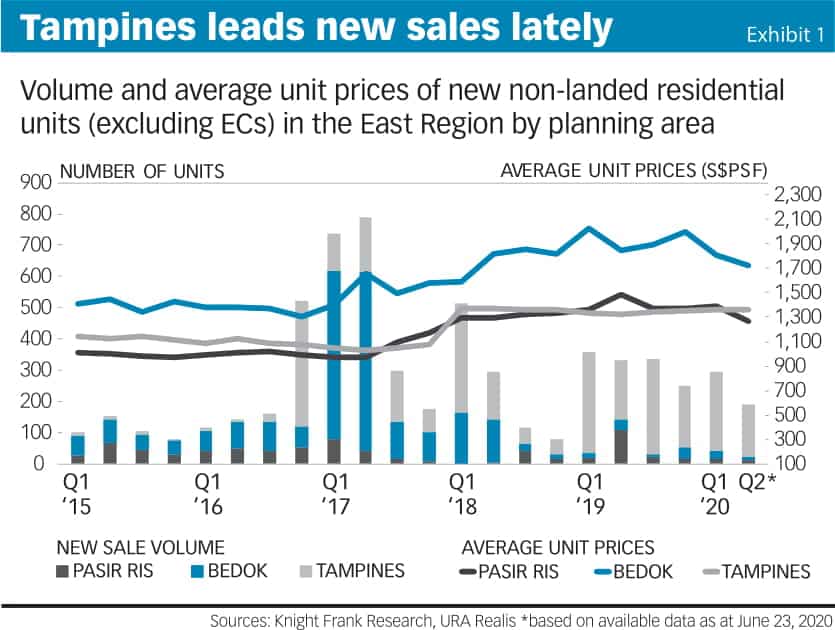 With sustained demand for new condominium units in the East Region, newly-launched projects have contributed to the boost in prices in the main residential areas of Bedok, Pasir Ris and Tampines, testing the upper limits of private home prices there in the past five years. 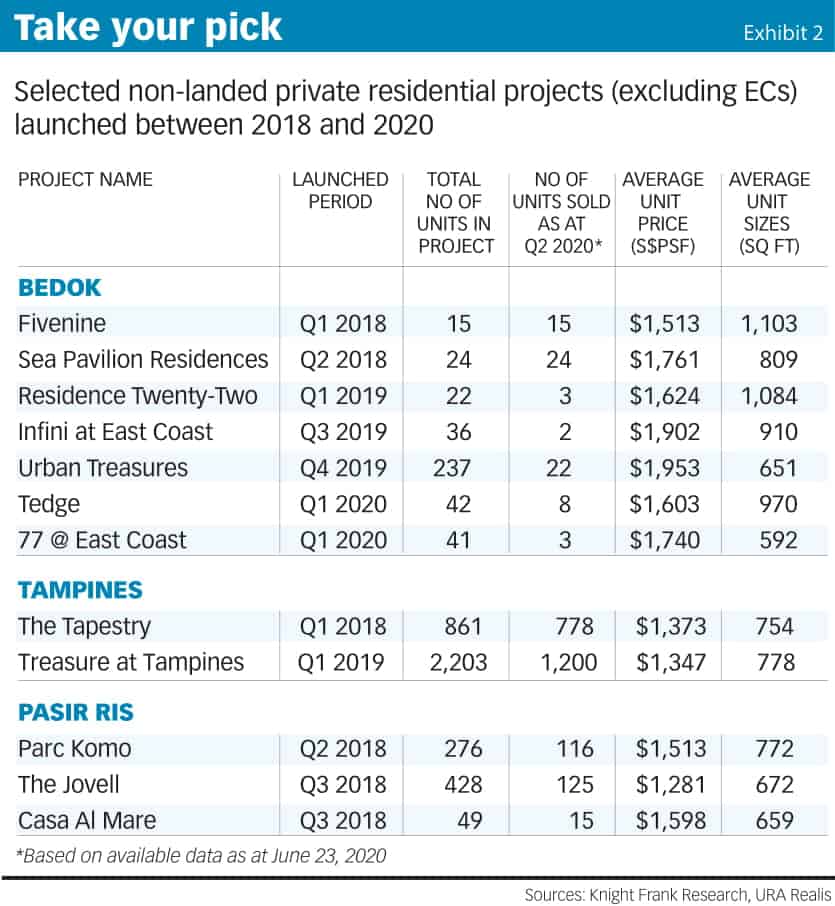 The Bedok Planning Area continues to command the best overall price premium per-square-foot over the other two planning areas, and the average unit prices of new non-landed homes there have grown an estimated 23 per cent between Q1 2015 and Q2 2020.

The Pasir Ris and Tampines Planning Areas have also chalked up substantial increases of about 26 per cent and 19 per cent respectively over the same period. 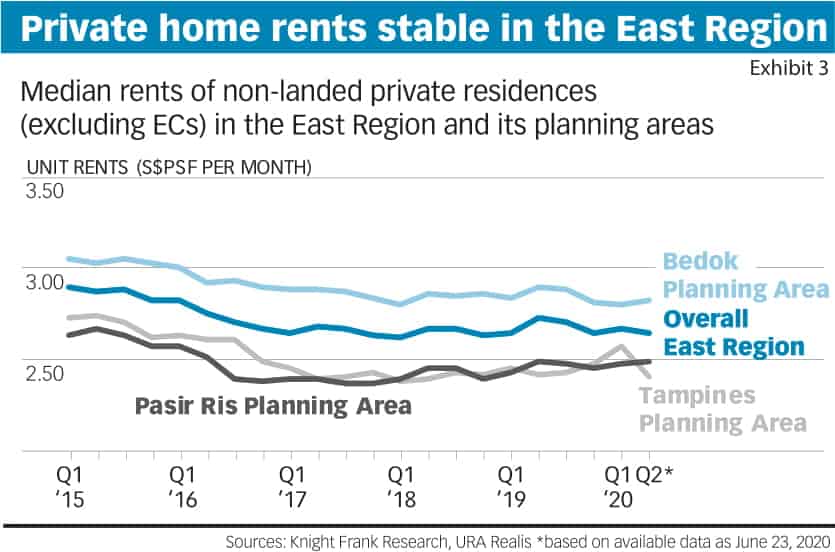 Similar to new home prices, Bedok commands the highest median rent, outpacing both Pasir Ris and Tampines primarily because of its location. Bedok is geographically the closest to the central areas of Singapore, as well as the popular East Coast Park.

For homebuyers, the East Region conjures up idyllic images of recreation along the beaches of East Coast Park, Changi and Pasir Ris, of ample parks and connectors, dotted with an array of shopping malls found in the town centres of Bedok, Pasir Ris and Tampines, together with the unique Jewel at Changi Airport.

But there is more…

In the next decade and beyond, the construction of Terminal 5 at Changi Airport with the development of the complementary Changi East Industrial Zone and Changi East Urban District will create new employment centres.

When the Thomson-East Coast Line and the final phases of the Downtown Line are completedalong with the Cross-Island Line, the East Region will be even more connected and integrated with the rest of Singapore.

There are also plans to improve lifestyle and housing. The new 60-hectare (ha) Bayshore housing precinct is expected to create around 12,500 new public and private homes, offering residents in waterfront projects community spaces and facilities at their doorstep.

In addition, new recreation spaces such as the HomeTeamNS Clubhouse at Bedok Reservoir Park will be developed.

However, the game changer has to be the future relocation of Paya Lebar Air Base. Some 800 ha of land that is currently being taken up largely for military purposes will be freed for the development of homes, offices, factories and recreational areas, with the development footprint estimated by the Ministry of National Development to be equivalent to 2.5 times the size of Bishan, including the surrounding industrial estates that will also be up for redevelopment.

In future, connectivity will also be enhanced with the potential for new transport corridors and direct routes into the East Region without needing to circumvent Paya Lebar Air Base.

This not only spells the promise of more living and working areas, but also liberates the height restrictions (imposed for the safe navigation of aircraft) among existing older buildings in the East Region.

It would not be unreasonable to envisage the proliferation of collective sale opportunities, when older properties, no longer shackled by low-rise plot ratios, are able to suddenly realise profound enhancement in land values post-2030.

With these developments expected to bring about a transformation of the East Region, buyers of projects launched in 2019 and 2020, such as Treasure At Tampines, Residence Twenty-Two, Infini at East Coast, Urban Treasures, Tedge and 77 @ East Coast can look forward to better integrated community facilities, in a well-planned region that boasts a long recreational coastline and the airport.

Potential future homebuyers can also consider the benefits that these changes and enhancements will bring in the coming decades when deciding on soon-to-be-launched projects in the East.