Robots that clean floors, chase pigeons away among technologies being tested at Tampines food centre

Robots that clean floors, chase pigeons away among technologies being tested at Tampines food centre 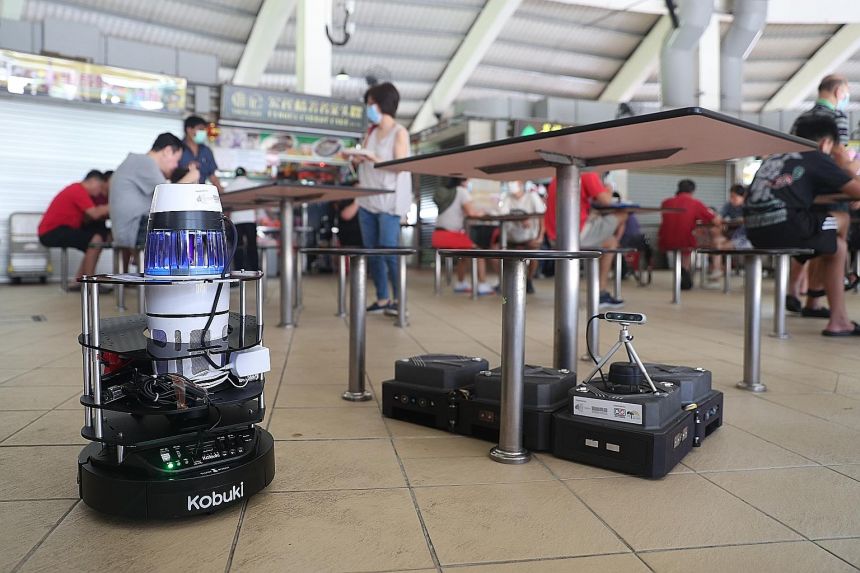 Cleaning floors, monitoring pests and other laborious tasks in maintaining facilities such as food centres could soon be done by robots.

Five robots which do tasks like cleaning the floor, inspecting false ceilings, disinfecting lift panels and mapping the density of mosquitoes in the surroundings are being test-bedded at Tampines Round Market and Food Centre (7 minute drive from Parc Central Residences), and could be rolled out to other food centres in future.

The robots are intended to relieve cleaners and workers of strenuous, repetitive tasks, and to free them up to fulfil other higher-value roles which could see them taking on new skills such as handling the robots, said Tampines Town Council.

Tampines GRC MPs, including Minister for Social and Family Development Masagos Zulkifli, were at the centre in Tampines Street 11 to see the robots in action yesterday.

"Robotics is a very important part of how we are going to transform the economy," Mr Masagos said. "This is both important for the now, so that we are able to be more productive, but also for the future, when in Singapore particularly, manpower is going to be a very big challenge 10, 15 years down the line.

"(It's) better to be ready now, produce these technologies, then deploy them, learn from them," he said.

The maintenance robots are developed by engineers from the Singapore University of Technology and Design (SUTD) and the project is funded by the National Robotics Programme. They will be deployed at the market and its surroundings. The one handling the inspection of false ceilings will also be used to chase away pigeons and mynahs by emitting sound frequencies which target these birds.

Around 20 full-time engineers from the university, alongside a mix of undergraduate and post-graduate students, are working on the project, which includes five other robots for cleaning and facility management being developed that could be test-bedded in Tampines as well.

The robots took between two and five months of development before they were ready for testing, said SUTD's Assistant Professor Mohan Rajesh Elara.

He said the robots are being deployed in the Tampines market for real-life testing and "final fine-tuning". The university is in talks with manufacturers to identify how the products can be commercialised, he added.

The project, which is also supported by the National Environment Agency, could also see the robots being rolled out at other food centres here, Dr Mohan said.

A spokesman for Tampines Town Council said that 14 cleaners in the precinct will be part of the pilot and will undergo about one to two weeks of training to use these robots. Using robots does not mean that the workers' jobs are cut. Instead, it provides upskilling opportunities for workers, he added, noting that with robots taking over the routine jobs, cleaners could focus on the sanitising roles which are difficult for the equipment to handle.

Commenting on this, Mr Masagos emphasised the importance of collaboration between humans and technology. "Robots will never take over our jobs...We will find use for the robots where it is either dangerous for our workers to go, or (where) it is not a productive way of deploying our labour, at the same time, creating new opportunities."