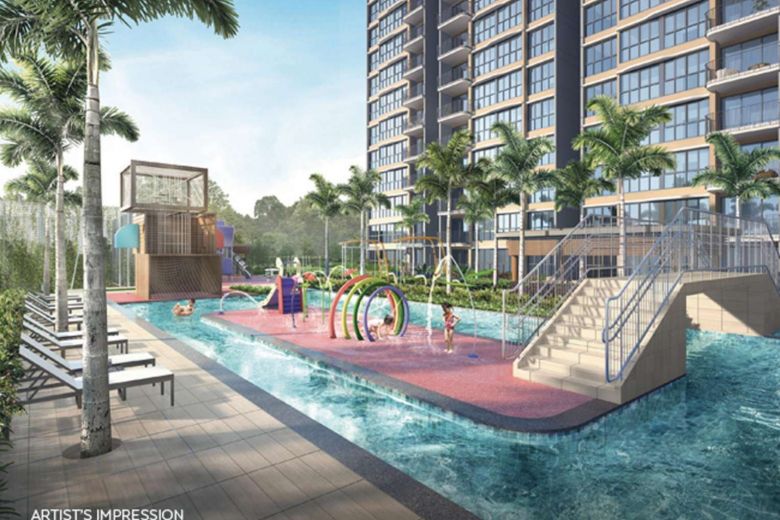 An artist's impression of the 531-unit Hundred Palms Residences, which is developed by Hoi Hup Realty and located in Yio Chu Kang Road

There may be no roll-back of the property cooling measures but the reception for an executive condominium that began selling over the weekend was red hot.

All 531 units of Hundred Palms Residences at Yio Chu Kang Road were sold within seven hours of launch on July 22.

They fetched an average price of $836 per square foot (psf).

Marketing agents ERA Realty Network and Huttons Asia attribute the success of Hundred Palms Residences to several factors: its location in the mature estate of Hougang, a reasonable pricing as well as good product design.

More than 2,700 e-applications were received during a two-week window that ended on July 17.

Hundred Palms Residences is the second EC to hit the market this year.

It follows the 497-unit iNZ Residence in Choa Chu Kang, which attracted more than 450 e-applications the weekend it opened in February.

Based on the latest data from the Urban Redevelopment Authority, the developer has sold 264 units including 24 units shifted last month at a median price of $786 psf.

Both ECs offer residents "smart home" technology, with doors and electronics that can be controlled by an app.

As executive condos are a public-private housing hybrid, some 70 per cent of the units are reserved for first-time home buyers. Non first-time buyers hit their 30 per cent quota

According to ERA Realty, the buyer addresses were diverse, with most of them being concentrated in the nearby housing estates of Hougang, Serangoon, Sengkang and Punggol.

Buyers were drawn to the well designed space and practical layout. All bedrooms are able to accommodate a queen sized bed, while the master bedroom is able to fit a king sized bed. All units also come with a yard and a choice of either a study or a utility room.

In the first half of 2017, developers moved 2,064 executive condo units, higher than the 1,867 units in the same period last year.