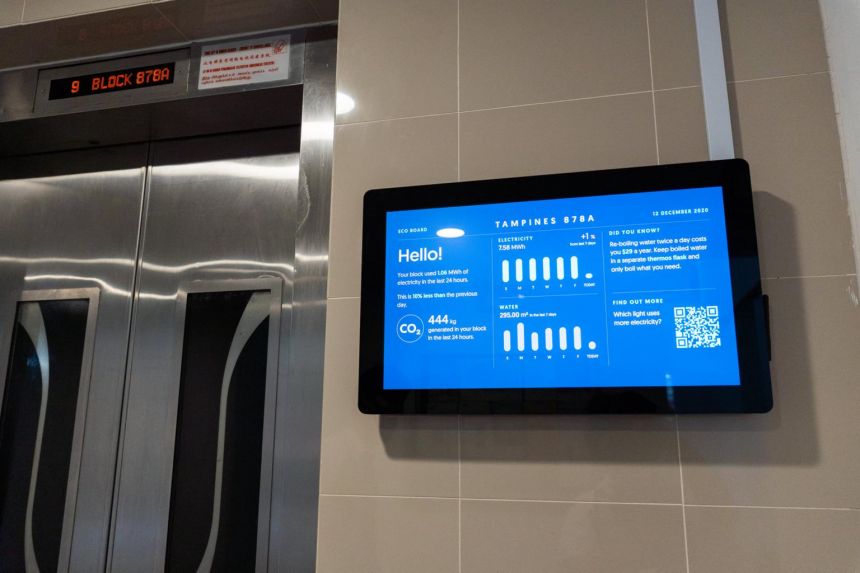 SINGAPORE - Residents from about 633 households staying in five Housing Board blocks in Tampines can now track their blocks' utilities usage at "Eco Boards" installed at their lift lobbies under a pilot programme.

The digital boards provide real-time figures of the block's aggregated water and electricity consumption and the resulting carbon emissions generated over the previous 24 hours.

They also offer residents helpful tips on lowering their utilities consumption and will allow the residents to participate in energy-saving challenges through competitions with other blocks.

Speaking at the launch event on Saturday morning (Dec 12) held at Block 878A in Tampines Avenue 8 (a 4 minute drive from Parc Central Residences) Minister for Social and Family Development Masagos Zulkifli said the Eco Boards are part of the Tampines Town Council's effort to make the estate Singapore's first "eco town".

Mr Masagos, who is the MP for the Tampines West ward of Tampines GRC, noted that Singapore is aiming to reduce the amount of water used by households to 130 litres per person daily by 2030, down from the current amount of about 140 litres daily.

"To get there, there are a lot of things that need to be done. First, we need to get information to our residents for them to know how they compare with others in terms of usage and what they can do to reduce their water usage over time."

More Eco Boards will be installed at five other blocks in Tampines over the next two months under the pilot programme, which will last about six months.

The programme is a partnership between Tampines Town Council and utilities provider SP Group, which designed and developed the boards.

Mr Chang Sau Sheong, chief executive of energy tech company SP Digital under the SP Group, said during the launch event that the boards will complement the SP Utilities app, which was rolled out in 2015 to let consumers track their individual consumption.

On top of its main aim to change residents' behaviour and nudge them to reduce their consumption, the boards will also help the town council and municipal operators improve estate management efficiency by enabling them to monitor utilities used for common areas.

This will allow them to pick up any anomalies and react quickly, Mr Chang said.

"Today, what they have is end-of-the-month (figures). This is often too late, say, if there's a leakage in the water supply or some issues with the electricity usage."