Tampines Quarry: Lake at the back

Tampines Quarry: Lake at the back

Old sand quarry has for a long time served as a hidden park for Tampines residents, from anglers to drone enthusiasts 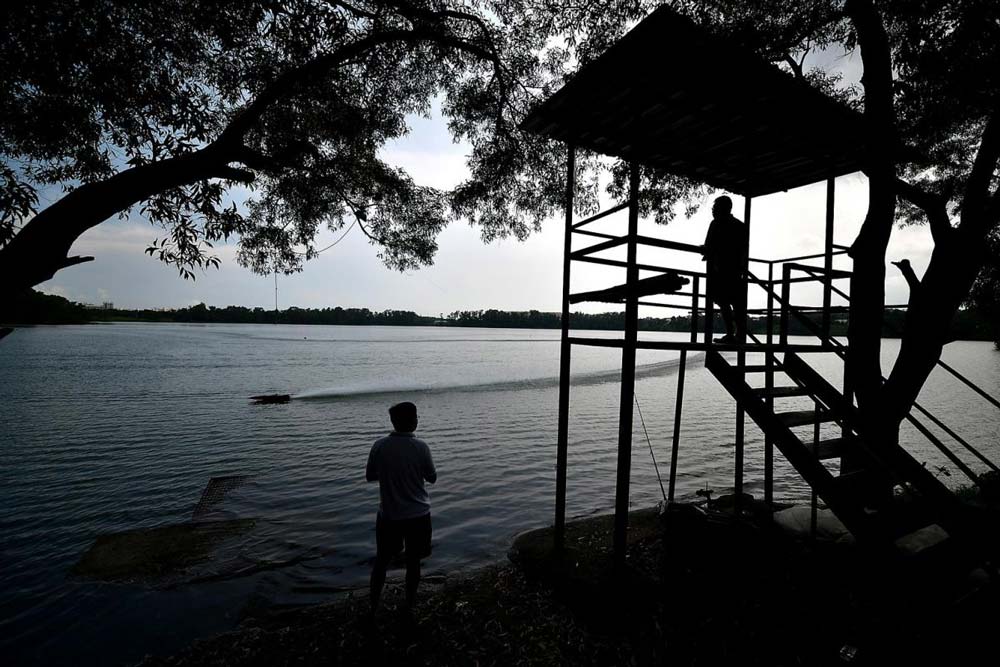 The quiet, calm waters of the lake are a draw for speedhunters David Tey (far left), 68, and Jacky Ho, 47, who can often be found racing their remote- controlled boats in the lake on weekends. The duo are part of Quarry Boats, an RC boat group that competes in races overseas. Mr Tey said he has been visiting the lake for the past 10 years for his "fix of adrenaline", and hopes that the quarry will remain untouched

As a child born in the 1980s, I got to play outside most of the time. No mobile phones, no tablets. Just a rubber ball from the mamak shop would keep me occupied for hours.

When I grew older, my parents gave me a bicycle, which to me spelt freedom. I spent even more time outside and I think my parents may well have regretted their gift.

After school, I would rush home to get on my bike and explore new places. My "posse" and I would ride on the trails around our Tampines neighbourhood. That was how we discovered the hidden park that we came to affectionately call"tasik belakang" (lake at the back).

It was actually Tampines Quarry - rainwater had collected in the old, disused sand quarry and transformed it into a lake of sorts.

The hidden park is still a trove of activities, from fishing to biking.

Nearby, the new Our Tampines Hub - Singapore's first integrated lifestyle hub in the heartland - has opened in phases since last November.

Tampines Quarry is located along Tampines Ave 10, the same stretch where Parc Central Residences EC is at.

The old quarry, however, has been an unofficial town hub for a long time for the different groups that call it their playground.

"I've been coming here for the past 10 years to get my fix of adrenaline," said 68-year-old David Tey, a retiree who frequents the lake on weekends to race radio-controlled (RC) boats.

Mr Tey and his friend, aircraft engineer Jacky Ho, 47, are part of Quarry Boats, an RC boat group that competes in races overseas.

"We're aware of the state land sign, but we simply have no other place to indulge in our hobby so we limit our playtime, so as not to create too much noise, and clean up after ourselves," said Mr Ho. The duo usually leave before sunset.

The calm body of water, about one-third the size of Bedok Reservoir, is also a favourite with anglers, who can be found knee-deep with their rods, hoping to reel in snakehead and catfish, and sometimes even fish that have been dumped from home aquariums.

On the trail by the water, I spotted some cyclists taking a break after a ride. They had pitched tents and set up chairs while Mr Syed Esa Alhabshee, 36, cooked lunch on an outdoor stove. They are part of the group Bromping.SG, which organises rides on weekends.

You would not have guessed you were in a bustling city. In the lake, RC boats were racing across from the anglers, and under the trees, a few friends were shooting the breeze.

As I walked out of the quarry, a sight touched my heart. Mr Burhan Khalip, 38, was teaching his four- year-old son Shariq how to fly a drone on a field near the lake.

The field is popular with model-aircraft enthusiasts, who have turned it into a mini airshow with remote-controlled helicopters and planes, and drones. Right in the middle of the field, foreign workers from a nearby dormitory were engrossed in a game of cricket.

Though the quarry is just a stone's throw from new residential projects in Tampines Avenue 10, those who frequent it hope it would remain untouched.

"I've been coming here for a long time and having a place like this for a retiree like me is better than staying home and doing nothing," said Mr Tey.

Reference: The Straits Times, Tampines Quarry: Lake at the back